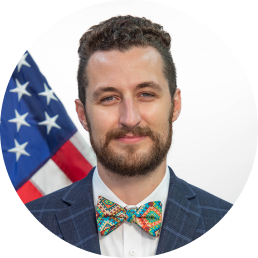 Trey holds a master’s in urban and regional planning from Virginia Tech, with a concentration in data analytics. His graduate research included the applications of artificial intelligence in urban planning and measuring the restrictiveness of land use regulations from open data. Prior to graduate school, Trey founded a company that helps public libraries appear in local online search results. Earlier in his career, he led the development of several software products in the government, education, nonprofit, and advertising industries as an Agile product manager.

Trey resides with his wife, Andrea, in Ewa Beach, Hawaii, a suburb of Honolulu. He is the lead researcher of the Hawaii Zoning Atlas, a statewide data advocacy project seeking opportunities to reduce the cost of housing through land use and zoning reform. Trey previously served on the boards of three nonprofits devoted to ranked choice voting, entrepreneurship education, and speech and debate, respectively. In his off hours, he can be found reading economics on the beach, puttering in his backyard garden, or tinkering in Python and R.

"As a software product manager, I am motivated by solving meaningful problems for many people. In the public sector I can streamline access to vital services for millions."

Trey was an Army kid and changed schools every year until the 8th grade.