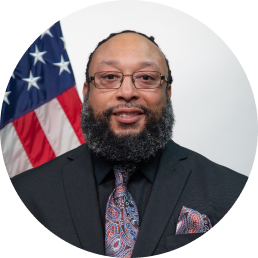 Joe was raised as a military brat in his earlier years until his father passed away and his family relocated back to Chicago. When going to high school, Joe attended Chicago Military Academy Bronzeville, where he graduated in the fourth-ever graduating class in the school’s history. Shortly after high school Joe enlisted in the United States Navy, where he would meet his future wife in bootcamp. At just around two years or so, Joe’s time in the Navy was cut short with the passing of his mother which resulted in him becoming guardian over his younger sister and brother. Some years later after moving to Virginia, he found that he had more than a passing interest in cybersecurity when he discovered that his information had been compromised in the Equifax data breach, which led him to his current work. When Joe is not doing cybersecurity-related work or learning, he enjoys spending time with his wife and their four boys and Germen shepherd Thor.

"I joined the U.S. Digital Corps because I liked the opportunity to immediately contribute to the the government and the people, while still being able to learn and receive feedback, guidance, and training."

Joe loves to make people laugh and enjoys making people happy or smile as a result.